Our normal pattern of worship is…

Thanks for wearing a face covering

Since 1 November 2005, Saint Paul’s has been part of a single parish with nearby Saint Aidan’s on Shobnall Road. The position of Vicar has been vacant since September 2019, but continuity of ministry is provided by the curate, Revd Dr Robin Trotter and two associate priests, Prebendary Phillip Jefferies and Revd Hamish Ferguson-Stuart.

The congregation at St Paul’s, as part of The Burton Three churches are committed to working toward realising the Vision Statement of our Diocese…

We endeavour through our worship, teaching and shared life to foster a direction of travel which builds up the Body of Christ by…

The church is a wonderful example of Victorian ecclesiastical art and architecture, and an ideal setting for richly ordered worship. Designed by J M Teale of Doncaster and E B Denison, later Lord Grimthorpe.

It is a cruciform building in the Geometrical Gothic style with a three-bay chancel with aisles, a five-bay nave with aisles, north and south transepts and a square central tower that houses a ring of ten bells. It has a family likeness, through Denison’s friendship with Gilbert Scott, to Doncaster Parish Church, the ground plan and the tracery of the large windows being almost identical, though on a slightly smaller scale.

Between 1889 and 1901 the chancel and south transept were enriched by George Frederick Bodley who did much work in the area (notably Holy Angels Hoar Cross and St Chad’s Burton). He adapted the south chancel aisle for use as a chapel, added a sacristy on the north side, and an internal porch at the south transept door. The chancel and sanctuary roof were painted to Bodley’s design, and a canopy was added above the original large circular stone pulpit.

A western narthex was added in 1910 as a memorial to Baron Burton, who had died the previous year. A calvary war memorial was erected in the churchyard in 1920 and a bishop’s chair of stone was built into the sanctuary wall in 1931.

The two west bays of the nave and the narthex were converted into a church hall in 1979 and at the same time several items were added from the former chapel of ease of St Margaret, including a wooden lectern by Morris and Co, a painting of the Crucifixion which was placed by the south door, and statues of Alpha and Omega which were added to the south chancel aisle chapel. 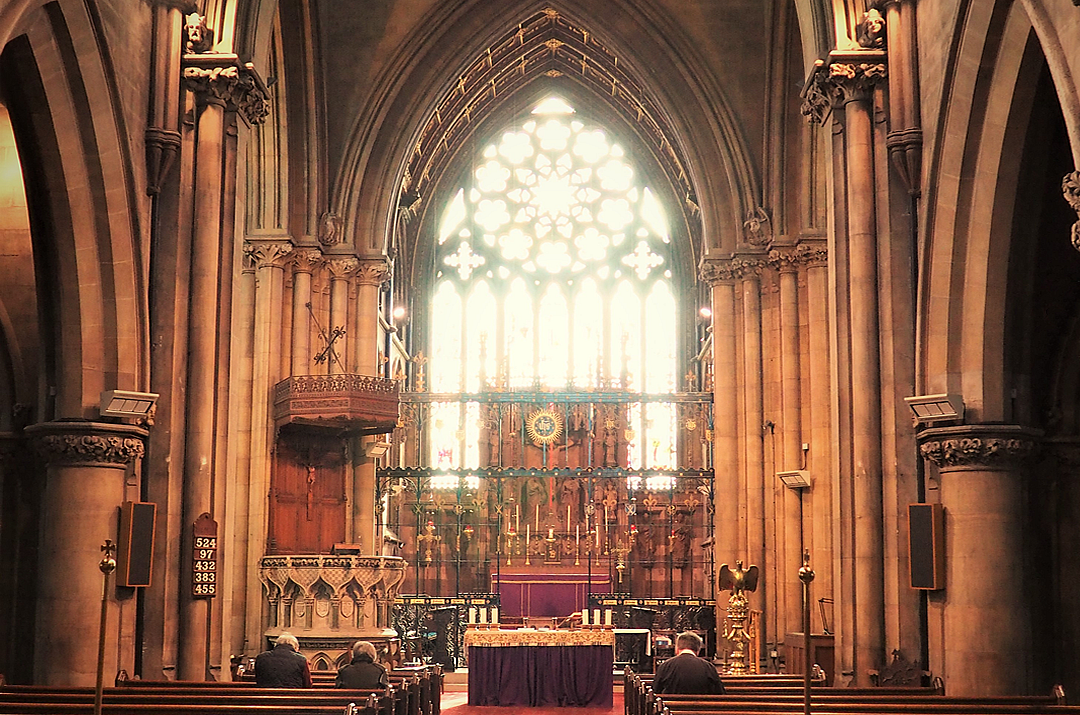 In 1894-5 the original three manual organ by William Hill & Sons of London was replaced by a four manual organ, one of the first to be built by the Hope-Jones Electric Organ Company Ltd. The Hope-Jones organ was itself replaced in 1985 when parts were removed to the Lancastrian Theatre Organ Trust’s museum in Manchester. The Hill organ was moved to Trinity Methodist Church, in George Street in 1896, and then in 2012 to Sankt-Afra-Kirche in the Berlin suburb of Gesundbrunnen.

The church now contains an organ formerly in Central Methodist Church, Chesterfield. It is sited in the north chancel aisle and although the case in the chancel gives the appearance that it speaks to the south, the organ actually speaks through the grille to the west. It is louder in the nave than at the console. The south transept organ case, which formerly housed the Hope-Jones Solo and Pedal pipes is empty. 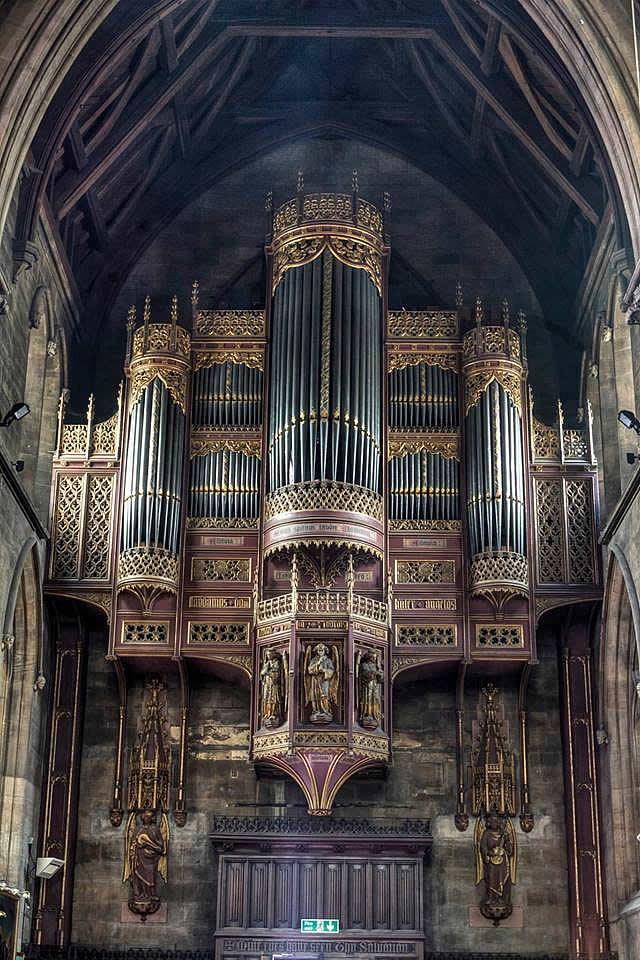 A Christening gives parents, godparents, the wider family and friends an opportunity to thank God for his gift of life; as the child will be baptised during the Christening it also marks your decision to start the child on an important journey of faith.
If you live within the parishes covered by The Burton Three churches or have some other meaningful connection with one of them, we will be pleased to discover how best we can help you embark on this journey of a lifetime. It would be wonderful if you came along to a Sunday service (you can find the regular service times elsewhere on this website) and talk things over with us. The date for the Christening can be usually be established and an application form completed when you come to see us.

You can download an application form by clicking here…  Baptism Application Form. We look forward to seeing you soon!

In the meantime, the Church of England has a really good website all about Christenings. Why not take a look by following this link?…  https://churchofenglandchristenings.org/

Whether you’re just dreaming of a church wedding, or already planning one, the clergy and people here at The Burton Three churches want to help and support you as best they can. Thanks to a fairly recent change in the law, there are now many more ways you might qualify to marry in one of our churches.
Please contact us by phone or email to discover how we can help you in planning your church wedding. Alternatively, why not come along to one of our services, meet us, see the church and have a preliminary chat. We’d love to meet you. In the meantime, the Church of England has a really helpful website about weddings. Why not take a look by following this link?... https://www.yourchurchwedding.org/

In 1874 the tower received a ring of eight bells at a cost of, £1050 cast by Taylors of Loughborough to the specifications of Sir Edmund Beckett QC, later Lord Grimthorpe. The tenor (in F) weighs 25 cwt, 3 qrs, 21 lbs. The first peal in 1876 was Grandsire and this was followed regularly by Double Norwich, Stedman, Superlative, London and Cambridge.

The church was consecrated in 1874 with Rev James H Fish as Vicar. He helped to form the Midland Counties Association and was its first president. He also formed St Paul’s Society of change ringers. The first peal on the bells was Grandsire Triples in 1879 conducted by W Wakley. The Vicar’s first peal was 5024 Kent Treble Bob, rung half-muffled on the occasion of the funeral of Archbishop Tait in 1882. His 18 peals included 6720 Superlative and the first ever peal of Stedman Triples rung by a band composed entirely of clergymen. Double Norwich, New Cumberland, Superlative, Cambridge, Stedman, Grandsire and Dutfield were regularly recorded. The sudden death of the Vicar in his 41st year was a great loss to the church, Association and Society, this coming at a time when his band was poised for the highest achievement of those days, a peal of London Surprise. However it came less than six months after his death and was the fourth ever of London to be rung.

Names which readily spring to mind are W Wakley, Albert P Wakley, A Wakley, H Wakley, W C Wakley, E L Stone, J Jagger, J Griffin, H Bastable, J W Washbrook, H Dains, F E Dawe, G Robinson, C H Hattersley, N J Pitstow and A P Haywood. The Rev F E Robinson practises his Superlative at Bennington and came to St Paul’s to ring his first peal in that queen of methods which was the ninth of Superlative ever to be rung. Three peals of Superlative on consecutive days in 1885 were the 20th, 21st and 22nd ever rung in that method. A silent peal of Stedman triples is recorded in 1886, each ringer having previously called a peal with the same figures. Miss Edith K Parker called Superlative here in 1911 and was the first and only lady to conduct a peal on the original ring of eight.

The last peal on the bells before recasting was Stedman Triples. It was also the 220th. The new ring of eight, 28-2~9 in D flat (1912), had as first peals Stedman triples, these two peals being Pitstow’s variation of Thurstans’ Four part.

As time went on it was suggested that this ring was ‘unmusical’, and after two hundred and twenty peals had been recorded, recasting with a new tenor (in D flat, of 28 cwts 2 qrs, 9 lbs) took place in 1912. Appeals were launched early in 1914 for £240 to add four small bells to make a ring of twelve. The fund was slow to accumulate and when war broke out later that year the money was invested in War Loans. After the Armistice further appeals were made, and two new trebles were added in 1922. One was the gift of W W Worthington Esq, and the other provided by parishioners and friends in memory of those who had given their lives. This ring of ten bells has continued in use to the present day, and the tower has a total of three hundred and eighty two peals recorded [in 1974].

The Great War of 1914-1918 took Coy Sgt Major H Wakley, Sgt R C Stone and Sgt A P Wakley, who between them had rung 343 peals. With ringing restricted during hostilities and armed forces commitments the band became sadly depleted. However in 1920 two trebles were added, No 1 by W W Worthington Esq., and No 2 by the parishioners, in memory of those who fell in the Great War. The first peal on the ten bells was Stedman Caters.

Around 1925 the ‘Wednesday’ band with Maurice Swinfield as conductor continued with Stedman and some years later the tally was over 230 different callings. R H Dove learned to handle a bell at St Paul’s about this time; scoring his first peal in 1926 at a nearby tower. In the 1930s James George of Birmingham rang the tenor on his 80th birthday to 1201st peal. The year 1945-saw B G Key a lively ringer and conductor at St Paul’s. After the ringing ban of 1940 was lifted a peal of Cambridge Royal was rung by a visiting band. Mrs D T Gardiner conducted Grandsire caters (her farewell peal in 1955 and Miss J: Toon conducted Grandsire, doubles (also her farewell peal) in 1964 and Miss E K Parker Superlative 1971. They appear to be the only three ladies to have called peal here.

Ringing locally before 1874 was very popular as the ‘Society of Change Ringers at Burton’ were subscribers to Clavis Campanologia 1778. Although 366 peals have now [1968] been rung in the tower, attempts are somewhat restricted to three or four per year, quarters being frequently rung.